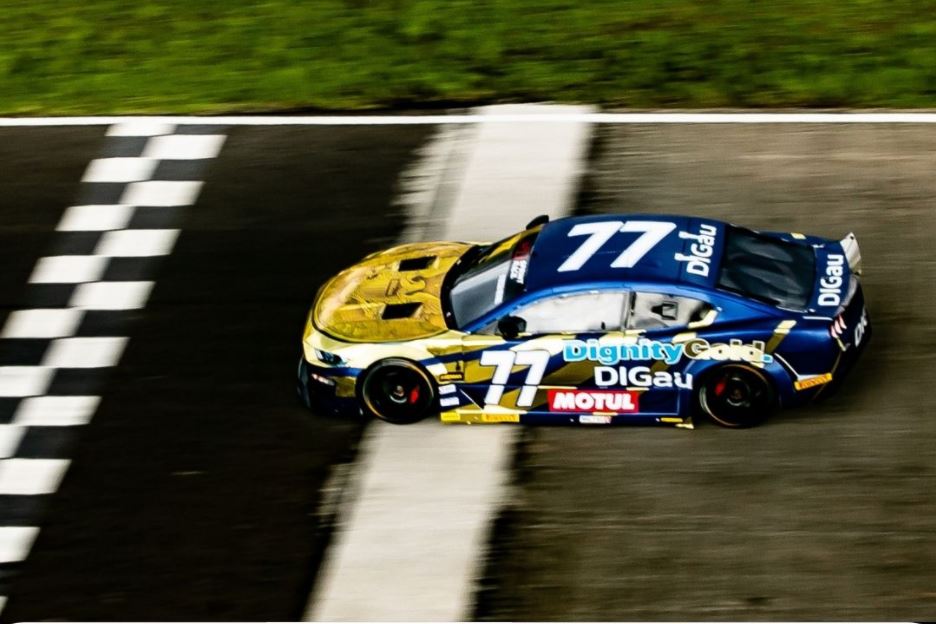 NEW YORK, NEW YORK, USA, March 25, 2022 /EINPresswire.com/ — Dignity Gold, the United States-based digital security company that is taking a revolutionary approach to using verified gold reserves to back its security token, announced today that the #77 Team Stange Ford Mustang driven by Ricardo Sperafico and sponsored by Dignity Gold, won its first race of the GT Sprint Race Series in Brazil. This was the first of nine race stages that will be broadcast live on Band Sports TV and the YouTube channels for Motorsport.com and Acelerados.

Dignity Gold is a United States-based digital security company that is taking a revolutionary approach to using verified gold reserves to back its security token, known as DIGau. Making the deal between Team Stange Racing and Dignity Gold even more unique, is that the entire sponsorship was paid in Dignity Gold’s DIGau tokens (traded on CryptoSX and BitGlobal).

“In a doubleheader weekend, it is tough on the team and everyone involved to make sure the cars are at the top of their standards and comfortable for the drivers. With that in mind, we want to say thank you to the team who made this victory possible,” explained John Stange, Jr., President and CEO of Team Stange Racing. “Most importantly, we want to thank Dignity Gold for being a great partner in our race day success. We are so excited to walk away with the first win of the season, and Team Stange’s first win in major motorsports.”

“We put our support and trust in the experts at Team Stange Racing, and they delivered in spades with a tremendous win in our very first race together,” explained Kent M. Swig, Chairman of Dignity Gold, “The win has driven enormous interest for the Dignity Gold token, DIGau, a U.S. compliant digital security that is a modern investment vehicle based on a traditional equity, gold-reserves, showing how this partnership is connecting racing fans and investors to the exciting world of digital securities.”

Dignity Gold, LLC is a blockchain development company creating securities tokens to establish investment opportunities into the U.S. precious metals mining and mineral sectors. The DIGau token is a verified gold reserve-backed security token represented by a pledge of at least $6 billion in gold reserves in tailings and alluvial placer deposits. DIGau tokens should be more liquid than physical gold which has significant logistical hurdles to its trading or physical possession. DIGau tokens should offer comparatively fast and easy transferability, within the bounds of securities trading laws, and are intended to be tradable any time of the day, year-round. Founded in 2019 by Stephen Braverman and Kent M. Swig, Dignity Gold is the parent company of Dignity Corp. which is engaged in issuing the Dignity token using the ticker DIGau backed by gold deposits located in the United States. For more information, visit www.dignitygold.com, follow on Twitter at @DIG_Au, Telegram, or Instagram.

Team Stange Racing expanded into the IndyCar Series in 2019, finishing 22nd in the Indianapolis 500. Its goal for 2022 and beyond is to consistently compete for wins in the NASCAR Cup Series, and multiple racing formulas in both the USA and internationally. Team Stange Racing aims to build a motorsports empire looking at other motorsport disciplines to compete in 2023 along with its NASCAR and GT Sprint Series programs.